Texas and the Civil War

Texas has a long and storied history.  It was inhabited by many Native American peoples, although it boasts having “six flags over Texas” in recorded history. The first was the Spanish Conquistadors who explored it and later established Spanish missions such as the Alamo.  Part of it was a colony of France for a brief period.  France was competing with Spain for an interest in the Gulf of Mexico and Robert de La Salle made a settlement along the Gulf.  It wasn’t very successful and 1689 it was abandoned.  After Spain, Mexico controlled it until 1836 when it became an independent republic, although settled by United States Citizens, mostly from Southern states.

It was admitted to the Union in 1845 as the 28th state and allowed slavery.  Mexico objected to that and the Mexican-American war ensued in 1846.  Mosby cousins, mostly from Missouri fought in that war.  After Lincoln’s election it seceded from the Union and joined the Confederacy on March 1, 1861.

After the Confederates lost, Texans were not readmitted to Congress until 1870.

Here is a snippet of the Texas “Declaration of Causes: February 2, 1861. A Declaration of the causes which impel the State of Texas to secede from the Federal Union.”

A DECLARATION OF CAUSES

The States of Maine, Vermont, New Hampshire, Connecticut, Rhode Island, Massachusetts, New York, Pennsylvania, Ohio, Wisconsin, Michigan and Iowa, by solemn legislative enactments, have deliberately, directly or indirectly violated the 3rd clause of the 2nd section of the 4th article of the federal constitution, and laws passed in pursuance thereof; thereby annulling a material provision of the compact, designed by its framers to perpetuate amity between the members of the confederacy and to secure the rights of the slave-holdings States in their domestic institutions–a provision founded in justice and wisdom, and without the enforcement of which the compact fails to accomplish the object of its creation. Some of those States have imposed high fines and degrading penalties upon any of their citizens or officers who may carry out in good faith that provision of the compact, or the federal laws enacted in accordance therewith

In all the non-slave-holding States, in violation of that good faith and comity which should exist between entirely distinct nations, the people have formed themselves into a great sectional party, now strong enough in numbers to control the affairs of each of those States, based upon the unnatural feeling of hostility to these Southern States and their beneficent and patriarchal system of African slavery, proclaiming the debasing doctrine of the equality of all men, irrespective of race or color–a doctrine at war with nature, in opposition to the experience of mankind, and in violation of the plainest revelations of the Divine Law. They demand the abolition of negro slavery throughout the confederacy, the recognition of political equality between the white and the negro races, and avow their determination to press on their crusade against us, so long as a negro slave remains in these States.

Many know of him from the  TV show “The Gray Ghost”

He opposed secession but was loyal to Virginia and commanded a Confederate battalion known as Mosby’s Raiders which practiced guerrilla warfare against the Union.

After the war he became a Republican and supported Grant. He was the consul to Hong Kong and an attorney the Justice Department.

“How little we know about the future, “ he wrote of the spring of 1861, when he followed the “tocsin of war.” “It was our country and we fought for it and we did not care whether it was right or wring.” In 1910, breaking completely with the normative Lost Cause arguments, Mosby declared that he “committed treason and am proud of it.”  He participated in numerous literary feuds and disputes, and frequently complained about the orthodoxy of the Lee cult. Mosby was hardly reluctant to “take sides with thrush” he said in 1910, but “the whole trouble I have is butting up against the popular belief in the infallibility of Gen. Lee.”

Most importantly, Mosby contributed some of the most candid expressions by any ex-Confederate about the place of slavery in the South’s cause. He remained hostile  or ambiguous on racial equality. But while a former slave owner himself, he viewed slavery apologetics by the 1890s as the most debilitating element of the Lost Cause. “I don’t go to reunions.” He told an old comrade, “because I can’t stand the speaking.” He despised the “oratorical nonsense” of so any speakers who recycled the ideas that the South neither fought for nor was responsible for slavery. Referring to one such speech, Mosby reacted:  “Why not talk about witchcraft if as he said, slavery was to the cause of the war. I always understood that we went to war on account of the thing we quarreled with the North about. I never heard of any other cause of quarrel than slavery. “I can’t see how setting the negroes free could have saved the Union.” He remarked in 1894,  “unless slavery was the cause of the breach.” And in 1902, he lief a telling guide to all lost causes in a letter to a member of hi battalion. “Men fight from sentiment, “ wrote Mosby. “After the fight is over they invent some fanciful theory on which they imagine that they fought.”

In 1907, Mosby also reacted to an especially righteous report of the UCV Historical Committee written by George Christian, in which slavery was depicted as a system of “patriarchal” happiness. Mosby wrote to a friend in “disgust. “ “According to Christian the Virginia people were the abolitionists and the Norther people were pro-slavery,” complained Mosby. “He says slavery was ‘a patriarchal’ institution. So were polygamy and circumcision.” Mosby denounced the idea that “Old Virginians” (founding fathers) were antislavery. Then he delivered a dagger at the heart of the Lost Cause mythology:

“Now while I think as badly of slavery as Horace Greeley did I am not ashamed that my family were slaveholders. It was our inheritance.

A blot on the name of Gainesville.

Back in the 1860s Gaiesville and Cooke county must have been a wild west town.  The settlers there needed protection from Indians, jayhawks, brigands and troublemakers.  This protection was mainly by the 11th Cavalry  of Texas Rangers led by William C. Young and others.

Before Texas joined the Confederacy, there was a vote, Cooke other nearby counties voted against, but they were in the minority. After the war started the Confederacy imposed taxes and a draft, but not on the large slave holders.  Many signed up to fight, including Thomas Mosby, Robert Bostick and James Lindsay. Others stayed in Cooke county either because they opposed the war or to protect their community.

When the draft began those in opposition formed a Peace Party.  There were several people who organized it, Henry Childs, Ephram Childs and IWP Lock included.  They created an initiation of hand gestures, a special hand shake and a password “Arizona”. Starting in early 1862 they recruited others to the movement.

Mr. McCurley was a mail carrier.  In September 1862 he stopped at the Hotel bar in Gainesville and met Ephram, who was pretty drunk.  Childs told McCurley about the clan and later McCurley reported it to Col. Bourland who was in charge of the military government there.

McCurley was sent as a spy to Dr. Henry Childs to get more info, and was initiated into the “first degree”.  He was told that the secret signs would be used as protection when the Federals came to Gainesville. He also learned the “second degree” that the clan wanted to help the Union by seizing ammunition that was stored in Gainesville, and that it would be done soon. He was sworn to defend members of the clan if they should be caught. The third degree was that they intended to savage the community, taking property and comely women for themselves, and murdering the rest.

Bourland and Young made a plan to use he militia to seize about 150 of the known and suspected conspirators.  The arrests occurred on October 1, 1862 although some had forewarning and escaped.

A public meeting was held on October 1, and five “good and true” men were appointed to pick 12 men for a jury. One of those five was James B. Davenport Sr. They in turn picked the jury which convened a “Citizen’s Court” to try the prisoners. While the trial proceeded, there was a mob of hundreds of people outside demanding that all the prisoners be hanged.

The jury required a majority vote to convict, and William C Young was the prosecutor.  Within the first seven days, seven people, including mostly the ring leaders, were tried and hanged. Two more were shot when they tried to escape.

Some of the jurors were gung ho for hanging, and others were reluctant, especially as the “court” considered people who didn’t know about the whole conspiracy.  One, Thomas Barrett refused to go on unless the rules were changed to two thirds to convict. They freed some and that enraged the mob. On October 11, the mob leaders said they would shoot all the prisoners if there weren’t more convictions and 14 others were hanged.

The court adjourned for a week, hoping that things would calm down. But then a man “hunting” in the river bottoms was killed, Wm. Young went with others to catch the murders, and he was shot and killed.  This renewed the frenzy of the mob.

The jury reconvened on October 18 with James D. Young as the prosecutor.  19 men were “tried”, convicted and hanged.  Round ups and hangings occurred in other nearby counties.  But Gainesville had had enough.

After the Great Hanging George Washington Diamond, a Confederate soldier, Southern Newspaper publisher and brother of one of the 5 court organizes, was given the court records as asked to give an account of the plot.  He wrote it out but never published it. The manuscript was kept by his heirs until 1963 when it was published by the Texas State Historical Association.

One of the jurors, Dr. Thomas Barrett wrote and published an account of the Hanging in 1885, but is was suppressed until one of the last remaining copies was rediscovered and published in 1961.

Barrett wrote:  “I am fully and completely satisfied that many of those who were duped, imposed on, and got into this organization never would have gone into this clan if they had known the dark and bloody intentions of the leaders.”

After the war the Federals wanted to try people for crimes committed during the war.  Barrett left Gainesville and went into hiding.  Others stayed and were tried and acquitted.  Barrett thought they had paid bribes. After an amnesty was declared for all crimes during the war he returned to Gainesville but found that he was blamed by some as a ring leader of the hangings and by others for his objection to hanging them all.  He wrote his pamphlet to get the story out.

Diamond, on the other hand seems to have been employed as an apologist.  He wrote:  “Our eyes are at first met by scenes of horror and bloodshed; the commission of crimes unexampled and unsurpassed in the annals of atrocities performed through human agents, make up the record of the organization.”

Barrett gave the facts, and Diamond gave the names.  In 1994 Texas Historian Richard McCaslin wrote the book Tainted Breeze about the Great Hanging drawing on these two sources plus others.

After the war a monument to the Confederacy was made in Gainesville.  It said: “No Nation Rose So White and Fair; None Fell So Free of Crime.”

In 1962, some citizens of Gainesville wanted to commemorate the Great Hanging, but the city leaders decided that wouldn’t be good for tourism. There is a monument from that time at the location of the hangings, but the wording is sympathetic to the vigilantes.

In 2012, at the 150th anniversary they again tried, and this time there was a small commemoration and a more objective monument. 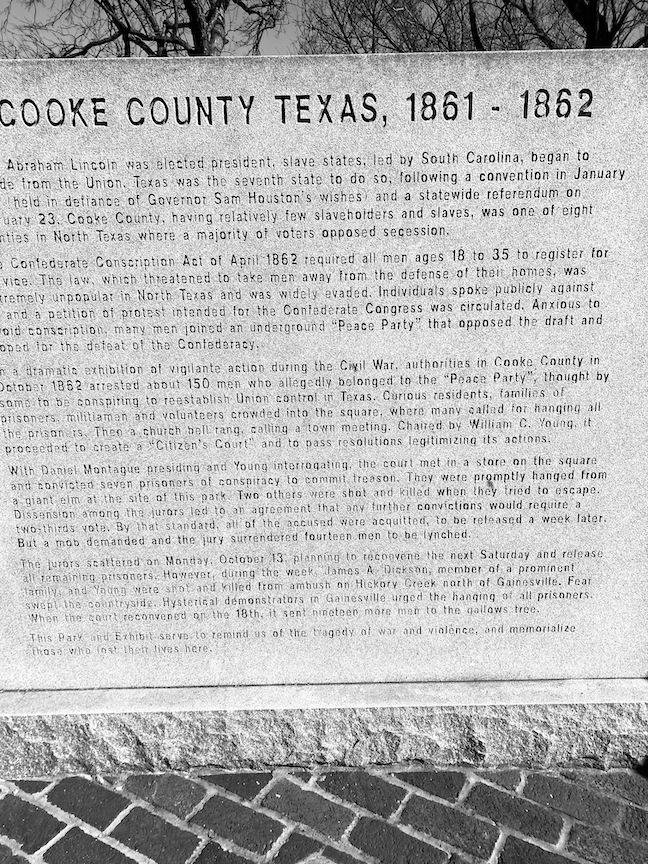